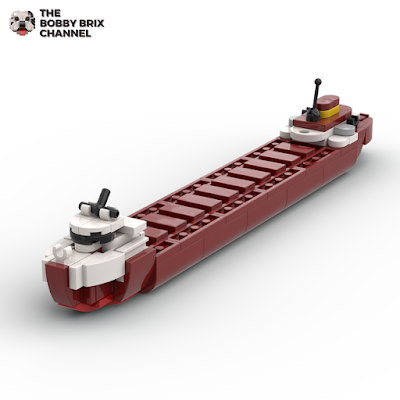 To some extent, the fate of this ship is unbelievable as it is one of the few famous ones that sunk in a lake, or to be more precise – Lake Superior. Launched in 1958, the SS Edmund Fitzgerald served as a freighter ship in the Great Lakes until she met her fate in 1975 during a heavy storm which brought her down to the depths of Lake Superior along with her 29-men crew…

This is a new-type of post that I will be making on Patreon for the public audience but also on this blog page, where I go in detail about the design and process of making my LEGO® MOCs.

It took me almost an hour of research just for the design!
Using historical blueprints and measurements, I firstly needed to give the model a certain size-scale to make it relevant with my other LEGO models. I had to choose between 1:1000 and 1:2000.
Most of my recent cargo ships are built in 1:2000.

But to put real-size into perspective:

Converted into centimeters and divided by 2000, the Edmund would only have had ~11cm of workspace. Too little for me to work with. So I went with the 1:1000 scale – giving me and the model a hefty 22.9 cm to work on carefully (I rounded it up with LEGO bricks). 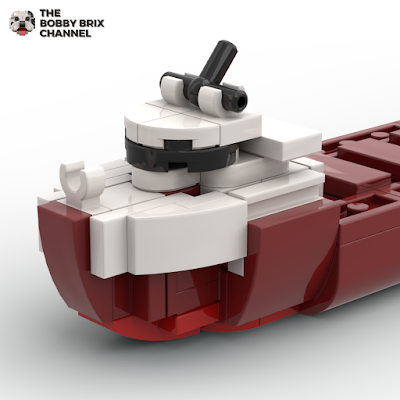 If you look into the shape of the bow, you might notice some resemblance with the one on the MV Blue Marlin LEGO MOC I built some time ago. This was actually my base-model to start with. I imported the entire ship into my Edmund file, extracted the bow of the Blue Marlin and reduced its size to fit it with the inverted hull of the SS Edmund. Once I got the overall shape of it, I inverted 1×4 semi-arc pieces and applied them along the entire hull up to the stern. Connecting them wasn’t an easy task. To do so, I used 1×2 side brackets to connect them with 2×2 curved pieces on the sides. They act as connectors between the inverted and non-inverted pieces and keep the structure strong all-together. 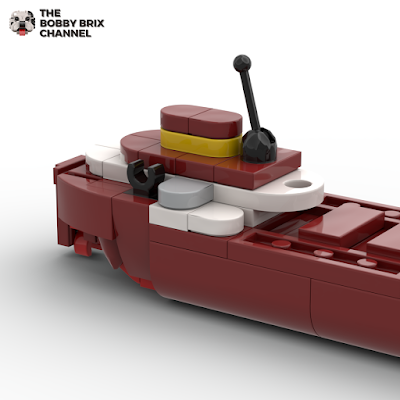 The stern, being the most vital part of it, wasn’t a piece of cake either.
It took me longer than expected as the entire structure also needed to be connected between inverted and non-inverted pieces. I also had to respect the color-scheme and the overall design of the lodging compartments of the crew, along with the machinery that was located in that area. I went along with using a lot of curved, semi-circle and quarter-circle pieces in order to smoothen the curve of the stern, while also giving it more detail. 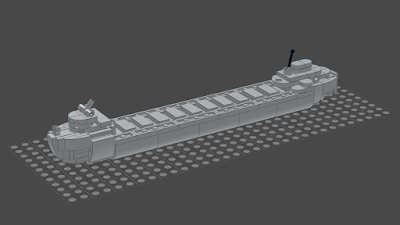 I only work with one color (usually light-bluish-gray) when designing my creations. It’s less distracting and helps me focus on the shape and design of my models before the aesthetics.

The SS Edmund had a dark-red color scheme along the hull and most parts of the bow and stern. Naturally, I had to go with Dark-Red bricks with some Red ones at the bottom (not all bricks can be dark-red). I also wanted to leave out some parts of the bow in white to imitate the real bow color-pattern of the SS Edmund. 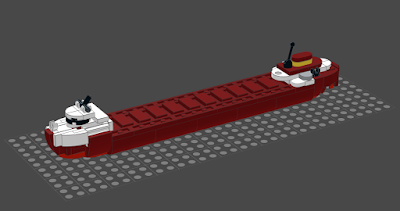 To date, I think this is the most detailed micro-scale ship I’ve ever built out with LEGO® bricks and hopefully it is only the beginning…

Stay tuned for more posts like these, if you like the idea of background stories, I will make more of them in the future!