Ocean July-ner Month is coming to an end with my LEGO Disney Magic Cruise Ship being the last build of this month before the final summary video coming out on Friday. It has been a wonderful and creative month for the channel and I hope you enjoyed my latest LEGO Ocean Liners' and Cruise Ships' MOCs!

More events will eventually come out on this channel and I will hopefully time it better next time (not in the middle of summer...).

This is the remake many have been waiting for on this channel so here it is. Meet the newly remodeled LEGO® RMS Titanic MOC by The Bobby Brix Channel.

You can check out the video on YouTube here:

Stay tuned for more blog posts especially the designing stories for the RMS Queen Mary and of course the RMS Titanic!

You can't talk about the RMS QM2 without mentioning the RMS Queen Mary! This one was a tough ship. Launched in 1934 she navigated through the waters of the North-Atlantic up until the 60's serving the purpose of an ocean liner, meant for the aggressive weather and the unnerving waves of the North. She was then retired and is still in use today as a boat-hotel and museum.

You can also get the building instructions at my shop here:
https://shop.bobbybrix.com/product/lego-rms-queen-mary-ocean-liner-moc/

Stay tuned for next week's Designing Story where I will share an insight on how I made this model and what caused me all the trouble on Friday. 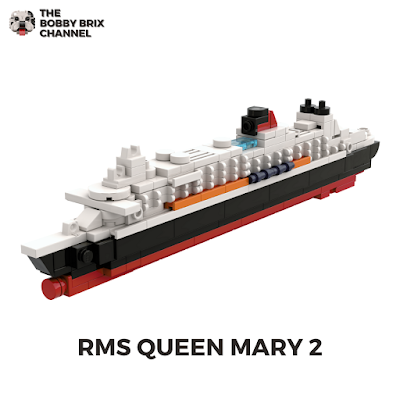 With Ocean Julyner Month starting, I had to come up with a new design template (which I may use in my upcoming designs) for my LEGO versions of well known ocean liners and cruise ships.

I then remembered my previous models of ships that were pretty rough in realism, proportions and color schemes. A redesign it is then - and the LEGO RMS Queen Mary 2 was the perfect candidate for a brand new look! 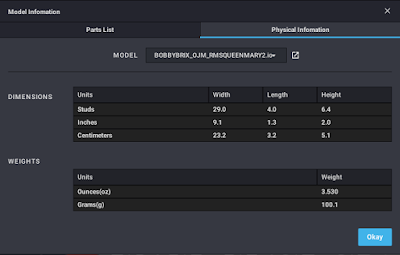 Unlike the Tesla, my approach on this model was different. Turns out, that the previous version of the RMS Queen Mary 2 was almost perfect in proportions ! The old "eye it all out" technique worked surprisingly well back then. However, I had to accommodate the 1x4 hinges on the ship with at least 4 consecutive columns, so I had to tweak the scale a bit and settled at around 1:1400 being able to fit all the major elements of the original ship into a micro-scaled version of it. The schematics below show how well the design and pieces fitted on this model, with some flaws... 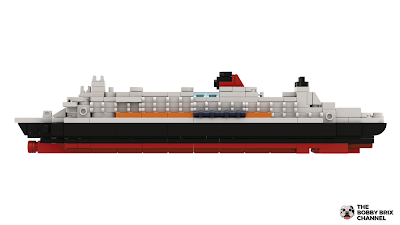 There is a lot to talk about the design of my LEGO RMS Queen Mary 2 MOC.
For starters the hull: red 2x4 and 1x2 plates form the main base-plate with red 1x2 stud plates attached underneath. Lots of black 2x2 bricks, 1x4 tiles and 1x1 bricks with studs were used for the overall shape and form of the upper part of the hull. The front of the ship also features the bulbous bow that the QM2 uses for sturdier navigation and stability.
Going upwards you will find 4 columns of white 1x4 hinge plates which should represent the passenger cabins with orange and dark blue emergency life-boats placed along lower-middle portions of these columns right above the deck of the ship.
Near the front of the ship you will find a rounded slope going up-to the wide bridge and observation deck with the antennas and communication compartments at the very top.
Going to the rear, there's the infamous black and red funnel with a set of exhaust funnels at the very back before the shape of the ship goes downwards towards the rear-deck. 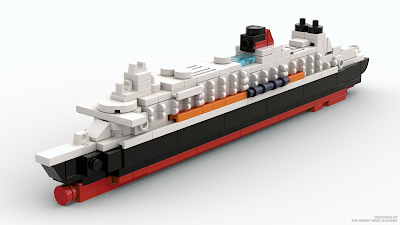 If you've read my previous blog posts, you might know by now that I usually design my models in "grayscale mode". I use light-bluish-gray as the default tone when I design new models so that the colors won't be distracting me too much from the process.
This time was quite different.
Since I had to import the older design of the RMS QM2 from my archive, I already had colors to work with. There were many parts to change in order to match the red, black and white color pattern of the original RMS Queen Mary 2 ocean liner. Here's what the final result looked like before sending it to the rendering phase: 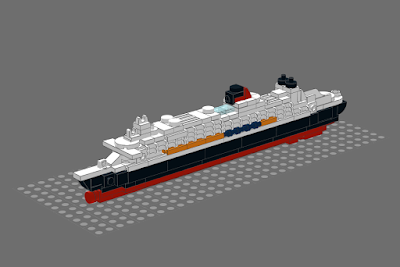 This is just the beginning of Ocean Julyner Month! Don't forget that you can also be a part of this event either by posting your creation on The Bobby Brix Discord Server (link in sidebar) or by using the #julyner hashtag on Instagram.
You can also share your creation on r/TheBobbyBrixChannel on Reddit.
Stay tuned for the upcoming cruise ship or ocean liner MOC, coming out this Friday at 4PM CET.
The Bobby Brix Channel 2021.
at July 07, 2021 No comments:
Email ThisBlogThis!Share to TwitterShare to FacebookShare to Pinterest
Labels: Bricklink Studio, Designing Stories, Ocean Julyner Month, YouTube
Newer Posts Older Posts Home
Subscribe to: Posts (Atom)